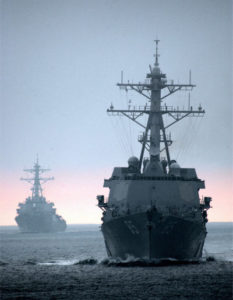 The Surface Warfare Community is composed of officers who are qualified in the surface warfare specialty, who man the surface ships of the Navy and whose goal is to command those ships. The Surface Warfare Officer (SWO) must develop experience and in-depth knowledge in a specific line discipline (operations, combat systems or engineering) and learn the fundamentals of engineering, weapon systems, and operational tactics. A SWO’s knowledge of surface warfare must also include an understanding of the operations of the various ship types within the surface force including carriers, cruisers, destroyers, frigates, amphibious, mine warfare and combat logistics force ships. Eventually, it must also include an appreciation of air and submarine warfare, as well as operations in a multi-threat environment.